When your Saturday night consists of great music in a lively venue with tonnes of female empowerment thrown in what more could you want?  Well that is exactly what we got when Rews played the last show of their tour at McHughs, Belfast.  The duo, consisting of Shauna Tohill and Collette Williams, have received critical acclaim over the past few years. They made sure the crowd of Belfast saw the reason why as they gave us a show that will definitely be remembered.

As they walked on stage, looking cool as ever, lead singer Shauna exclaimed– “Are you ready to rock?”.  They went straight into their first song “Rip Up My Heart”.  From the very start they were showcasing their iconic harmonising as well as their incredible energy.  If you had just walked into the venue and didn’t know who was playing you’d be astounded at the noise the two could make.

The girls then opted to go straight into their second song “Can You Feel It?”, their debut single.  It was refreshing that they were not sticking to tracks from their album Pyro but playing songs from across the spectrum of their career.  This track really showcases Collette’s talent as a drummer; there were multiple points during the song where my full attention was on her.

Both Collette and Shauna had continuous banter throughout the show, including a continuous theme of how warm it was in the basement venue.  This added a very personal touch to the gig and it allowed us to get a glimpse of their personalities as well as their musical personas.  When they were chatting they were very down to earth, then they suddenly transitioned into rock start when they played a song like “Violins”.

As the evening went on, Rews were musical perfection and the crowd was loving it.  Every time you pried your eyes away from the set and looked around you, everyone was singing, dancing and enjoying their night.  The energy was rife on stage as they were constantly having fun with one another whilst playing and Shauna was frequently displaying her Mick Jagger-esque moves.  You could really tell that Rews and the crowd were working off each other’s liveliness.

The track that was the absolute highlight of the night for me was the fantastic “Miss You In The Dark”.  The harmonies throughout were completely flawless and the way Shauna can go from dancing around on set to singing with her eyes closed and really feeling the music is nothing short of mesmerising to watch.

The diverse setlist continued through the night as they played gems such as “Muse”, “Your Tears” and “Shake Shake”.  Rews have cleverly discovered a type of formula for their music in that each song is musically different and varied yet they have a signature sound that makes them instantly identifiable.

The entire evening was a privilege to be a part of and it made it all the more special as it was the last date of their tour.  Rews played McHugh’s in Belfast but I am incredibly excited to see where they will be playing next.  The energy, fun and downright female empowerment they offer means they are band you do not want to miss. 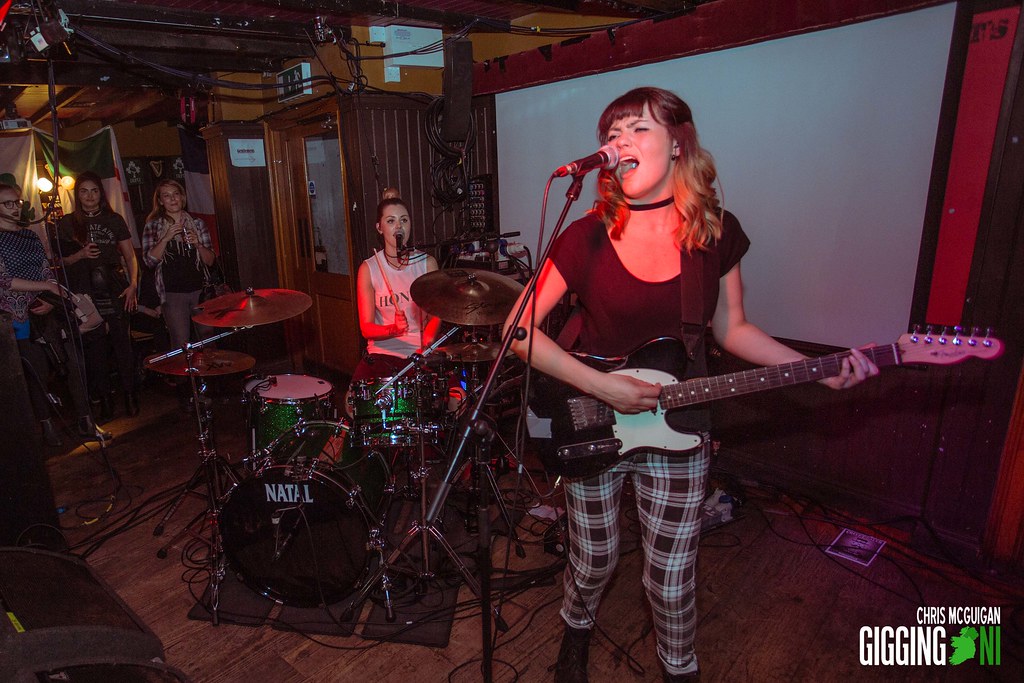