Over the past year there has been so much anticipation around the Derry punk band, Touts headlining their own show.  After some envious support slots, including Paul Weller and Liam Gallagher, we finally got what we wanted.  The three-piece that is taking NI by storm brought their punk attitude to the Duke of York Belfast.  We knew this show was going to be something special and naturally we weren’t disappointed.

The night kicked off with Belfast grunge band, Hand Models.  Their set started with a “Hello we’re a band called Hand Models” before the bassline kicked in for their first song “Toner”.  From the very beginning of the song the guys infused The Pixies and Weezer with some old-school Placebo in places.  Their set was incredibly varied.  One moment you’d have shouty punk rock and the next you have a track like “Autumn Tooth” that is more reminiscent of Radiohead.  The guys were a great choice to get the crowd ready for the main headliners as their energy and enthusiasm for their setlist was apparent with every song.

Following Hand Models’ set everyone was geared up to finally see Touts, our main act of the night.  The lads walked onto set under the red lights and went straight into their first track “Stay”.  As expected the night kicked off with crazy energy and an unrivalled punk vibe.  After capturing the crowd’s attention they went into their next song “Saturday Night Scumbag”.  The interchanging of lead vocals throughout completely changed the dynamic and immediately showcased the guys’ talent.

As the set continued I kept thinking to myself “How are these guys still going?”.  Every single song they gave it their absolute all and the energy didn’t waiver the entire night.  Everyone in the venue mirrored their passion as people were jumping around and dancing.  One song that was particularly vigorous was their well-known track “Bomb Scare”.  Lead singer Matthew started by turning his back away from the crowd and moving like Joe Strummer.  A particularly funny part was mid song they had to stop and Matthew explained “Sorry folks I’ve winded myself” – that gives a bit of an insight to the liveliness of the set.  Meanwhile throughout the song everyone was going crazy.  There were moments where security had to move people back from the set as people were falling into the band.

The night ended on the belter of a song “Gloria”.  As the guys explained this was their final song of the night the crowd began chanting “No more tunes!” before the guitaring kicked in.  We thought “Bomb Scare” was a crowd pleaser but this song was something else entirely.  The entire dynamic of the room was brought up a level as mosh pits were forming in the tiny venue.  The people that weren’t in the mosh pits at the front were dancing around and belting the lyrics back to the band.

The entire night from start to finish was nothing short of remarkable.  I feel that Touts at Duke of York, March 2018 is one of those gigs where all in attendance will be looking back in years to come and remembering how great a night it was.  Not only was the energy of the gig completely unrivalled but their playing was impeccable.  With Matthew’s guitar, Luke’s bass and Jason’s drumming there was not one single song that wasn’t outstanding. 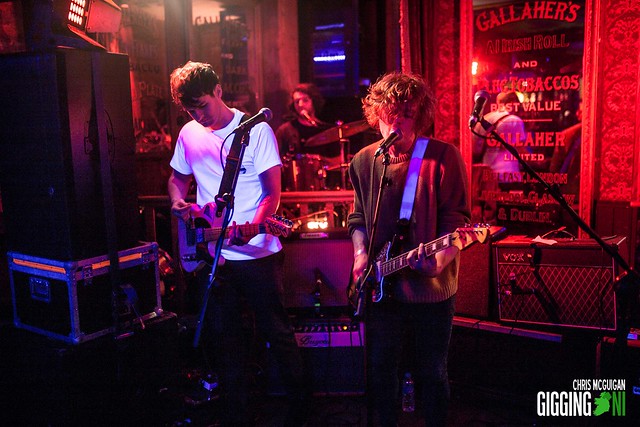