Wednesday night saw heavyweight US metal legends Avenged Sevenfold make a stop in Belfast ahead of their headlining slot at this year’s Download Festival.

Supporting the music veterans were Swedish metal band Avatar, who put on an impressive set for those who had made the effort to get down early to the SSE Arena. Avatar’s set was a perfect combination of showmanship and musicianship. The elaborate circus-esque staging paired with the band in costume created a threatrical atmosphere, further fuelled by Johannes Eckerström’s charismatic stage presence and painted face. 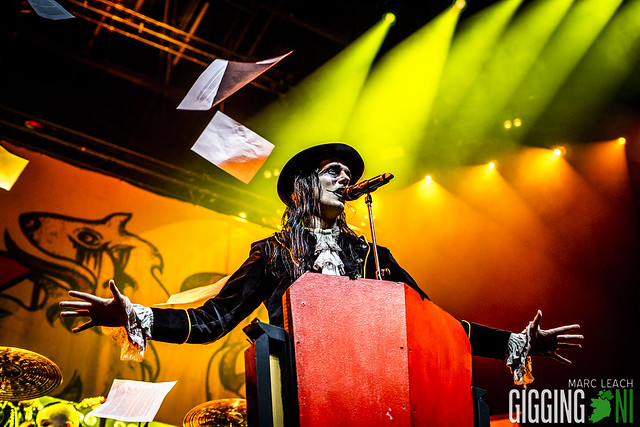 Having formed in 2001 the band themselves are no strangers to performing and made reference to the fact that this was not the first time they’d shared a stage with the headlining act. After performing “The Eagle Has Landed” from their album Feathers and Flesh Eckerström reflected, “It’s very nice to share a stage with Avenged Sevenfold again. They’ve been very good to us over the years, as have their audience.” 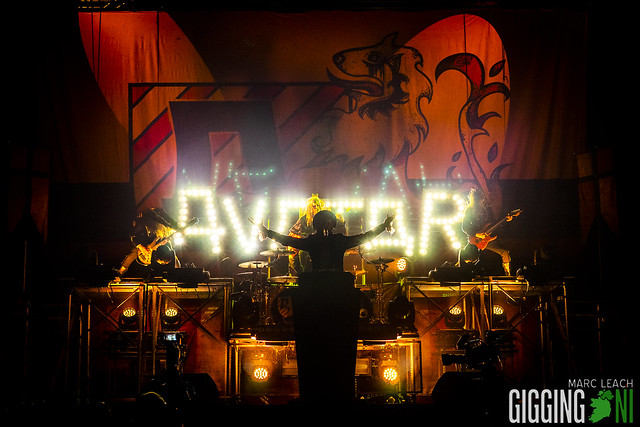 Avatar interacted with the audience throughout their set and the crowd were happy to oblige. It’s hard not to enjoy the quirky atmosphere the band creates, and it’s clear their image is something they pride themselves on. Eckerström pondered the fact that strangers usually cross the street when they see him, which riled up an understanding cheer from the crowd. This led the frontman to announce, “Ladies and gentlemen, we are Avatar and we smell like a Freakshow!” before launching into their hit of the same name.

Eckerström thanked the audience for coming early to catch their set, and the band left the stage to a host of cheers. At this point the SSE Arena was a sea of fans dressed in black Avenged Sevenfold tshirts eagerly awaiting the headline act.

As the crew dismantled Avatar’s circus and set up the stage for Avenged Sevenfold the anticipation in the crowd was mounting. The screens finally lit up with the band’s infamous Death Bat logo, which was met with manic cheers from the crowd. Avenged Sevenfold began their set with “The Stage,” taken from their latest album of the same name. A walkway into the crowd allowed frontman M. Shadows to get up close and personal at his leisure, with guitarists Zacky Vengeance, Synyster Gates and Johnny Christ occasionally also taking a wander. 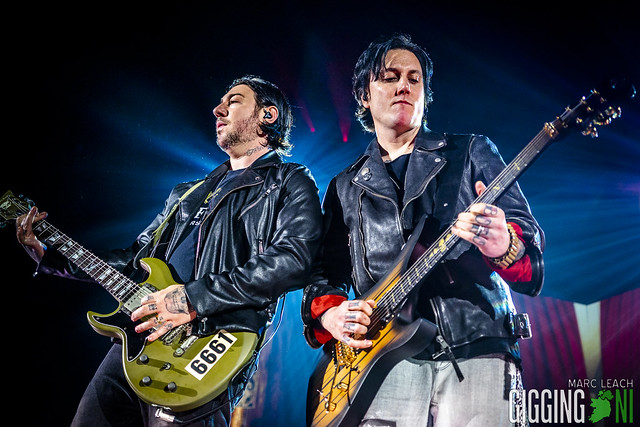 The band’s setlist took all seven of their albums into consideration, appealing to all fans and showcasing their talent as a collective. The versatility of M. Shadows’ voice allowed him to transition with ease from harsh growls to melodic vocals in “Afterlife,” taken from the band’s self titled 2007 album.

Avenged Sevenfold have the ability to create an exciting and almost theatrical atmosphere without the props and elaborate staging that other bands may use. The intros to a lot of their songs such as “Nightmare” and “Hail to the King” have a build that creates an electric atmosphere, fuelling an excitement in the crowd that’s undeniable. All members of the collective have showmanship and talent to their own merit, and it’s hard to know where to look at times. 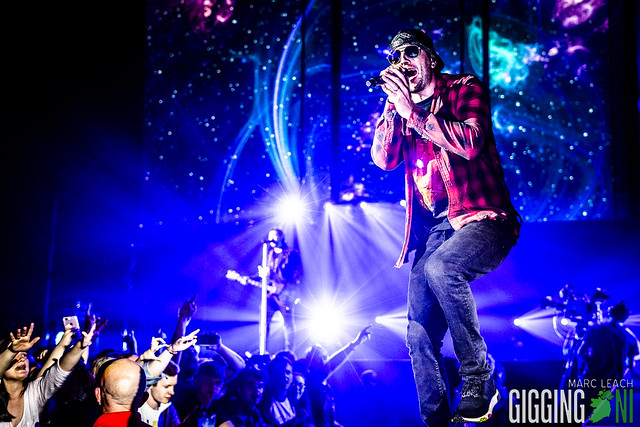 M. Shadows addressed the crowd and acknowledged that Belfast often get neglected on their tour, adding “Up north here has got to be one of the most beautiful places we’ve ever been. I’m sure you guys take it for granted but it’s a real treat to play in your home town.” Asking if this was anyone’s first time seeing Avenged Sevenfold, he gave them a warm welcome before aptly launching into “Welcome to the Family,” from Nightmare.

The arena faded to black as the screens lit up with the familiar photo of the band’s late drummer James ‘The Rev’ Sullivan. This signalled it was time to perform “So Far Away,” a tradition that honours his memory. A montage of photos was the backdrop to the touching tribute, with M. Shadows addressing the crowd and asking if they’d ever lost someone they wish they could see again, before adding, “That’s not how life works.” 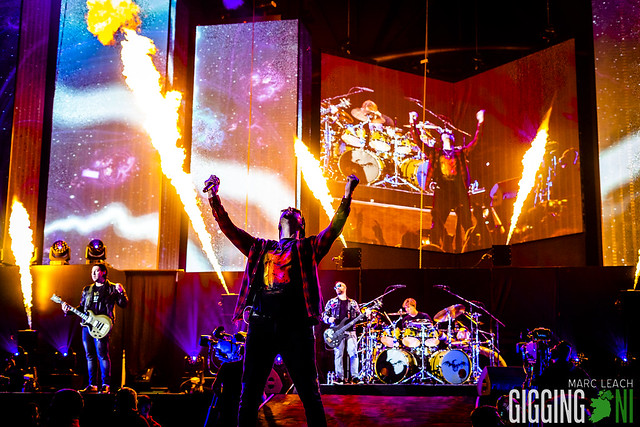 Avenged Sevenfold again alluded to what was next when the screens displayed a quote from Dr Samuel Johnston – “He who makes a beast out of himself gets rid of the pain of being a man.” The audience erupted at the realisation the band were about to play “Bat Country,” one of their most iconic songs complete with guitar duel. Synyster Gates and Zacky Vengenace took to the walkway and hypnotised the crowd with their talent, their showmanship and skill captivating the audience. This, coupled with M. Shadows’ flawless vocals was something really special.

Avenged Sevenfold left the stage to a crowd who were eager for more. They returned to perform a three song encore including “A Little Piece of Heaven,” before finishing on “Unholy Confessions” from Waking the Fallen. The growls of M. Shadows riled up the crowd, with several mosh pits forming in the arena. The audience erupted in applause as the band left the stage and the lights dimmed for the final time.